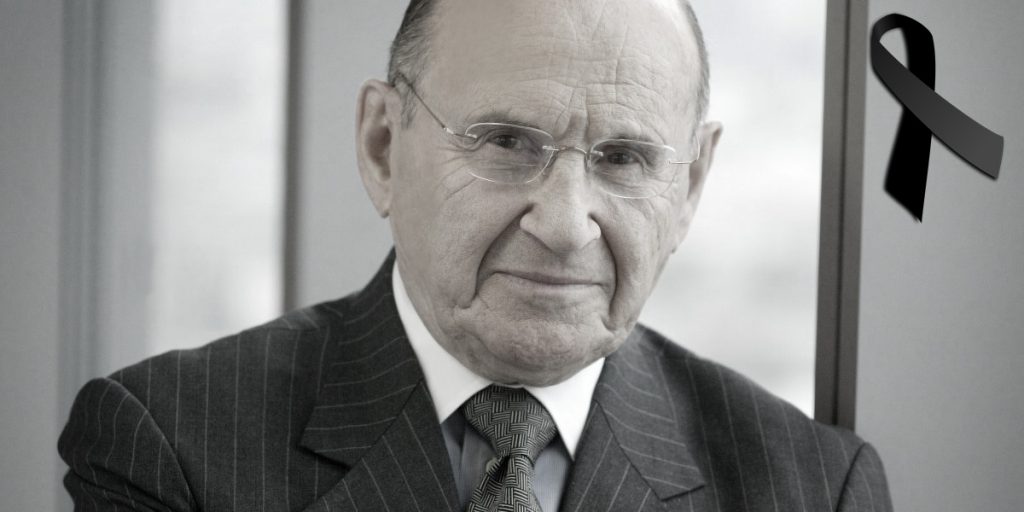 It is with deep regret and great sadness that we inform you of the passing of David Mitzner, the founder and long-time President of the Board and CEO of Rida Development Corporation and Apollo-Rida Poland, on September 23, 2016.

David Mitzner was born in 1915 in Warsaw where he lived with his family until the outbreak of World War Two. The following occupation of Poland was the most challenging and tragic period for David. Risking his life, he supported his loved ones who were imprisoned in Warsaw Ghetto. He bravely crossed the borders between the zones occupied by the Germans and the Russians. During one of his expeditions, he was arrested by a Soviet patrol and sentenced to eight years’ labor in a gulag in Siberia. After his release in 1948, he returned to Poland but found no trace of his family and community and decided to start a new life for himself in the United States of America. He arrived in America, his new homeland, on April 11th, 1949, on his 34th birthday with 17 dollars in his pocket as his only possession. In the USA, he went on to found Rida Development Corporation, a renowned American hotel developer, and later Apollo-Rida Poland, one of the largest American investors in the Polish real estate market.

David’s rich and extraordinary life stands as a testimony that, with great fortitude and strength of character, one is able to overcome the suffering, pain and the cruelty of fate and emerge victorious even in times of contempt and death; even throughout the most testing experiences, one is able to retain one’s dignity and, despite all the adversities, rise and succeed; that one is not destined for failure. He never lost his serenity and optimism. Thanks to his determination, ambition and titanic work, he achieved huge professional successes, and can serve as an extraordinary role model for all of us who had the honour of working with him and participating in the implementation of his outstanding projects.

He was not only a wonderful boss to all of us, but also a close friend who made us all feel important. He captivated us with his amazing personality, fascinated us in every direct contact, and evoked authority and huge respect.

David found fulfilment not only in his professional life. He started a happy family and was a wonderful husband, father, grandfather and great-grandfather.

He had an equal and sincere love for Poland, America and Israel. He always stressed that he felt like a Varsovian and that he returned to Warsaw, his beloved little homeland, as often as possible, as long as his health and strength lasted, proud and happy to participate in the rebuilding of Poland.

His life experiences and great sensitivity led him to become active in charity work. He was a donor of Yad Vashem and Shaare Zedek Medical Center in Jerusalem and a funder of scholarships at Yeshiva University.

In 2004, he published his memoirs under the title “Nesim (Miracles) All Around Me”, which chronicled his amazing life journey. In 2006, the Wall Street Journal profiled him on the front page in a feature cover story about his career and experiences. In the same year, he received an honorary degree from Yeshiva University. In November 2014, at the age of 99, he was awarded the Order of Polonia Restituta (Polish Medal of Honor) by the President of the Republic of Poland Bronisław Komorowski for all of his efforts in helping rebuild and revitalize the economy of Poland following the collapse of the Iron Curtain.